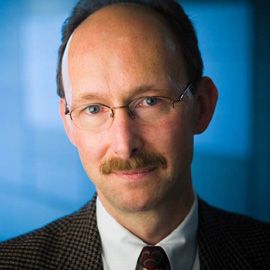 (Focus, Fall/Winter 2017-2018)
“My SJR graduation present was a one-way ticket to LAX to attend Caltech. It took me a while to realize that my parents had no idea when exams would be over, of course, so no point in buying the return ticket. Caltech is a unique place; around 900 students (total), all studying either science or engineering – if you know that you are interested in science, Caltech is the right place to study. While getting a B.Sc. in Chemistry, I took classes from three people who later won Nobel Prizes. When I arrived at Caltech, I intended to study Chemistry because at SJR I had found it challenging, while Physics was not. By the end of the first quarter, I knew that I had made the right choice, but for entirely the wrong reason. From there, I got a Ph.D. at the University of California at Berkeley and spent a year as a postdoctoral research fellow at Cambridge University. I started my independent research career as a Professor of Chemistry at the University of Illinois and later moved to Carnegie Mellon University as a Professor of Chemical Engineering.

“I consider myself fortunate to have received an excellent education at SJR; one that stimulated my interest in science and put me on a path that has worked well for me. Scientific research is a very competitive endeavour, but constructively competitive and collegial. I get to think about problems to which no one knows the answer, and there are rare moments when you figure something out and realize that you are the only person on Earth who knows. You also get to meet some of the world’s true visionaries. I travel professionally and meet other scientists from all over the world; people with different cultural backgrounds but common interests, and often, mutual friends. This year I will have given lectures or attended conferences in ten different countries, not to mention three additional international airports.”

What advice would you give to current students at SJR?

“The thing about SJR of which I am most appreciative is that I did most of my ‘growing up’ while boarding there in Grades 11 and 12. That has made the subsequent journey much easier. On the flip side and no different from most high school experiences, you don’t know how big and diverse the world is until you get out there to see it and engage with it for yourself.”
Back