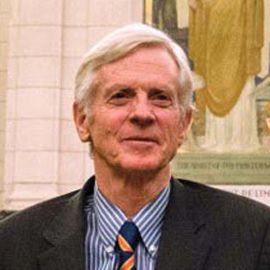 (Focus, Fall/Winter 2016-2017)
It was more than 60 years ago that Winnipeg-born David Kilgour enrolled at St. John’s-Ravenscourt School. World War II had only ended 10 years earlier, and his belief in justice and human rights would carve a career in public service and advocacy for the next six decades.

While at SJR, David won the Governor General’s medal, so it was no surprise that he would go on to do tremendous things by serving our country locally and abroad and ultimately serving those who could no longer speak for themselves.

After receiving a BA in Economics at the University of Manitoba, he studied law at the University of Toronto, graduating with an LLB in 1966. He was admitted to practice in Alberta, British Columbia and Manitoba and chose to article with a Vancouver law firm and then worked as an assistant city prosecutor for the city of Vancouver. It was in Vancouver where he first ran for public office in the federal riding of Vancouver Centre in the 1968 election, losing to incumbent Liberal Ron Basford.
Following the 1968 federal election, David went to work for the federal Department of Justice in Ottawa and later became Crown Attorney for the Dauphin Judicial District in Manitoba. From 1972 to 1979, he served as a senior agent of the Attorney General and a constitutional advisor to the Government of Alberta, a position he held until being elected to the House of Commons in the spring of 1979.

During his nearly 27 years of service in the House of Commons, David held a wide variety of portfolios, including Parliamentary Secretary to the Government House Leader, Minister of External Relations, Minister of Indian Affairs and Minister of Transport.

His career in the House of Commons has been marked by tough decisions and having to stand up for his beliefs. In April 1987, he was dismissed as Parliamentary Secretary by then Prime Minister Brian Mulroney for criticizing his government’s ethics and its treatment of Western Canadians. Three years later, after voting against the Goods and Services Tax, he was expelled from the Conservative caucus. He briefly sat as an independent Progressive Conservative before joining the Liberal Party in 1991.

After joining the Liberals, he served as Deputy Speaker and Chairman of the Committees of the Whole House. He then became Secretary of State for Latin America & Africa (1997 – 2002) and later Secretary of State for Asia-Pacific (2002 – 2003). He has travelled to more than 75 countries and represented Canada abroad on numerous occasions.

David is also passionate about Rwanda and ensuring that the atrocities committed there in the mid-1990s are never repeated. He counts General Roméo Dallaire as one of his personal heroes and in April 2004 participated in the Canadian delegation sent to the 10th anniversary remembrance ceremonies. David also contributed to La Mission au Rwanda, a book about the aftermath of the genocide, and continues to write on issues of human rights.

CANADA AND THE WEST
David has always been a strong advocate of representing Western views, even if it means criticizing his own party in the process. He has published two books on the topic of regional alienation: Uneasy Patriots: Western Canadians in Confederation and Inside Outer Canada.

He believes in a stronger voice for Canada in the world. He advocates for strengthening our human rights commitments and engaging in multilateral peacekeeping and peace-building efforts. He has been instrumental in bringing the situation in countries like Burma, Sudan and Zimbabwe to the forefront of Canadian foreign policy, and he works with NGOs from around the world to promote the advancement of human dignity for all.

From 1990 to 1994, he served as the Chair of the Canadian chapter of the International Committee for a Free Vietnam, and he continues to shed light on the plight of political prisoners in Vietnam In December 1994, David’s efforts to promote human rights in that country were acknowledged by the Committee for the Release of Political Prisoners in Vietnam.

In April 2005, he chose to become an independent Member of Parliament and did not stand in the general election of January, 2006. In 2006, the Washington-based International Coalition to Investigate the Persecution of Falun Gong in China asked Kilgour and David Matas (human rights lawyer and activist) to investigate volunteers’ seemingly bizarre but persistent claims of organ pillaging/trafficking from Falun Gong.

Together they released two reports and a book, Bloody Harvest, and have continued to investigate. (The revised report is available in 18 languages from www.david-kilgour.com.) To their surprise and dismay, they concluded that for 41,500 transplants done in the years 2000 to 2005 alone the only plausible explanation for sourcing was Falun Gong.

The main conclusion as of 2007 was that large-scale organ seizures from unwilling Falun Gong practitioners were occurring: “Their vital organs, including kidneys, livers,
corneas and hearts, were seized involuntarily for sale at high prices, sometimes to foreigners, who normally face long waits for voluntary donations of such organs in their home countries.” In 2009, they published an updated version of the report as a book, and travelled to 50 countries to raise awareness of the situation.

Kilgour and Matas were recently speaking in Hong Kong regarding ending organ tourism in China. To read more, go to www.davidkilgour.com/2016/DK_Final_Notes_for_Hong_Kong_Events_August_2016.pdf

For their investigative work on organ harvesting, Kilgour and Matas won the 2009 Human Rights Award from the German-based International Society for Human Rights
and were nominated for the 2010 Nobel Peace Prize.
Back