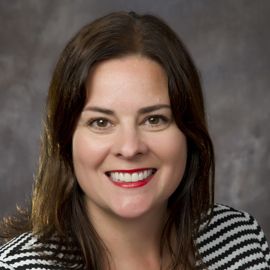 Heather Stefanson ’88 is a politician in Manitoba. She is a member of the Manitoba legislature, representing the Progressive Conservative Party.

(Focus, Year in Review 2015-2016)
Back in 1977, when her own father was running for political office, Heather got her first glimpse of the world of politics when she went door-to-door with her father as part of his campaign. “My parents were always involved in the community, both politically and as active volunteers,” she explains. “They were the ones who instilled in me the importance of giving back to the community in which you live. They sparked my
interest in politics.” Motivated by this early inspiration and later seeing her friends and peers begin to move away from Manitoba to seek opportunities elsewhere, Heather decided to get involved in politics herself to help make a difference to our
province and encourage people to stay.

Life post-SJR has been exciting and varied for Heather. After graduating in 1988, she studied Political Science at the University of Western Ontario before moving to Ottawa to work in the Prime Minister’s office. A subsequent position working for the Minister of Agriculture brought her back to Winnipeg and, when she found herself out of a job following the election of 1993, she decided to pursue the Canadian Securities Course and worked at Midland Walwyn and Wellington West Capital as an investment advisor until 2000.

“In 2000, my career took a change back to politics,” Heather notes. Two years previously, Heather had moved to the south Winnipeg riding of Tuxedo after marrying her husband, Jason. With the resignation of the Progressive Conservative leader Gary Filmon in 2000, she successfully ran for nomination in his former riding of Tuxedo against Stephen Fletcher. She was elected to office in the bi-election of November that year and was then re-elected in the subsequent elections of 2003, 2007, 2011 and, most recently, 2016. Having held a number of shadow cabinet portfolios, Heather’s most recent career progression came in the wake of the PC party’s provincial win in April 2016, when she was named Deputy Premier, Minister
of Justice and Attorney General as well as the Keeper of the Great Seal of the Province of Manitoba.

When asked how her time at SJR shaped her career, Heather notes the many life skills that she learned during her time here and which she has carried with her in the years that followed. “SJR taught me independence and the ability to work through things successfully myself,” she says. Moreover, her time at SJR fostered the skills of “leadership, compassion, the value of community and respect for others” – all of which she continues to demonstrate in her political ventures. Heather recalls in particular her English teacher Ray Grynol, who “took me under his wing” when she arrived at SJR in Grade 10, teaching her how to write an essay and, perhaps more
importantly, helping to build her confidence in speaking in front of the class. “Being taught by him was a turning point for me,” she says.

Heather has plenty of invaluable advice to offer this year’s graduating class. “Be patient,” she says. “Take the time to develop your own path, and work hard – maintain the strong work ethic that SJR has taught you and take that with you through life. Remember where you came from and be passionate about what you believe in.” Above all? “Remember that SJR has helped you get to where you are today, but tomorrow is up to you – so have fun with it. Life is worth enjoying!”
Back